The Magic of Fanzines (Q&A with editor John Kastanaras of Greek fanzine 'Merlin’s Music Box' - beyond of Rock and ...further) 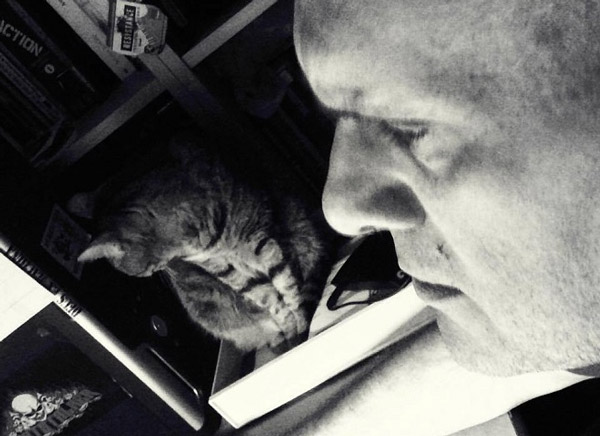 "I believe that rock music should have a place in the social movements against xenophobia, racism, fascism, sexism, etc. One such example is Antisomata – Antibodies, an activist group made up of musicians; the fact that they managed to bring almost ten thousand people to an event about the refugee crisis speaks for itself."

Merlin’s Music Box was, is and will be a fanzine - co-founders was John Kastanaras, Vassilis & Michael Tzanoglos - which released its first issue on October 1989 (cover with Irish punk folk band of Pogues) and ended its printed circle on 1995, after 26 issues. It has been a new activated on spring 2014, this time in a digital form through facebook and through its website. Its goal is to present music bands and artists not only from the rock scene but also from other music scenes, to plan and organize music events and, most of all, to please Merlin's friends.

How has the Rock counterculture influenced your views of the world and the journeys you’ve taken?

I think it came naturally. At a very young age I was introduced to rock music through some older friends and began listening to what is now called classic rock (Deep Purple, Pink Floyd, Led Zeppelin, Black Sabbath, 60’s psychedelic music, etc.). I’ve never been narrow-minded about music, perhaps because that’s how it was back then. I listened to progressive rock, a lot of Frank Zappa, but also punk rock (my most played album is probably the debut album by The Clash – I still play that). By then, I had formed a certain social and political outlook and began to gravitate toward the counterculture. My countercultural influences were not necessarily limited to music, but also included a wide variety of “underground” fiction, and historical and political literature.

What do you learn about yourself from the Rock n’ Roll culture and what does the blues mean to you?

The most important thing for me is not directly related to the music itself. Through the scene I met some people, musicians or not, who eventually became good friends and have stood by me through thick and thin. As far as I’m concerned, rock’n’roll culture is not something concrete; it is multi-faceted and can lead to different directions. It’s not the destination that counts; the journey can go on forever, there is never a lack of beautiful or interesting things in rock. The blues, in my opinion, is the foundation. You can learn to play music by playing the blues; you can easily relate to the lyrics, and find common characteristics with other types of folk music from all around the world. If you listen to Muddy Waters’ Electric Mud – that’s the most “rocking” album there is! The blues is at the heart of rock music, the gateway that leads to a world of magical sounds, colors, and stories that evoke countless emotions. It is a close parallel to Rembetika and Middle Eastern music; it expresses pain, sadness, frustration but also hope. 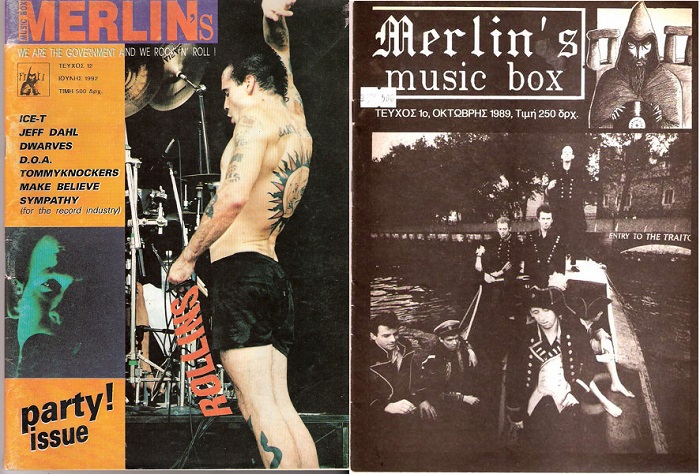 It began as a kind of an experiment, or test. The first issue came out in late 1988 and was mostly influenced by international publications, but also by some early domestic ones. Apart from the musical content, we wanted MMB to have a political bent, but our main goal was to introduce readers to stuff that could not be easily found elsewhere. I would like to believe that we achieved that, at least to a degree. Now, twenty years after our last printed issue, we are back with an online edition, with the same goal. What was very important then and continues to be so today is our contributors; it is they who help us make MMB what it is. The online edition was instantly met with positive responses, not just from old friends, but also from young people who had not yet been born during the magazine’s printed run. This, to me, is a sign of hope. The philosophy behind MMB has always been the DIY principle. At the moment, I don’t think we know what we would like to achieve. I guess what we want to do is expose current music and art that is often ignored even by the underground media. Right now, what we want to do is provide a platform for people to express themselves freely. It goes without saying that racist, sexist, fascist, etc. views have no place in MMB. The background of its creators and contributors should vouch for that.

What do you miss most nowadays from the music of past? What are your hopes and fears for the future of?

I don’t think I miss anything in particular, at least in regards to the music itself. Nowadays, everything is documented and there is a wealth of resources that can be accessed online. However, there is also an information overload that prevents one from fully appraising the work of contemporary bands or musicians. So, when it all gets too much, I go back to the old stuff. I neither hope for nor fear anything in particular. Things will take their course. There will always be good music and bad music, but there is no account for taste. I would like to see more and more small communities join together to make something bigger. 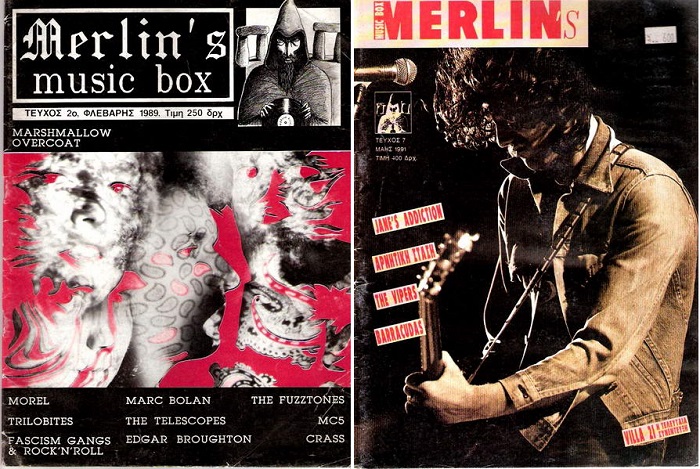 If you could change one thing in the musical world and it would become a reality, what would that be?

I would like to see people giving more support to local rock (in the widest sense of the word) bands. We have great musicians, whose work can easily stand alongside that of international artists, and it’s really frustrating to see sold-out gigs by international acts while Greek bands routinely play to small audiences. I don’t want to come across as parochial or chauvinistic, but I happen to live in this country and have the opportunity to see from up close the effort and energy that some people invest in their work and I would love to see them rewarded for that, because they are truly worth it.

Make an account of the case of Rock n’ Blues in Greece. Which is the most interesting period in local scene?

Between the late ’80’s and early ’90’s there was an explosion in the local independent music scene, followed by a period of decline. The last decade saw the emergence of a new generation of better-trained musicians, and then there are those who are still active from the old guard. Maybe it has something to do with the recession. I think that today there are more bands than ever before; creativity abounds and the results are more mature. The younger musicians are able to build upon the past and draw upon a vast amount of influences to carve their own paths. 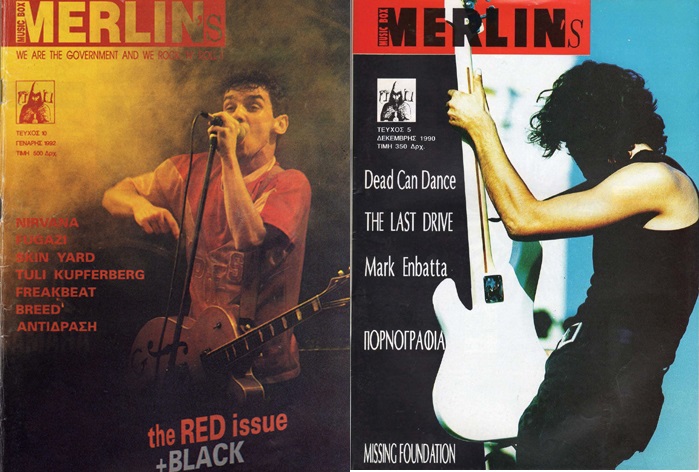 What are the ties that connect the legacy of Fanzines from paper to web? What touched (emotionally) you from Fanzines?

One thing that has remained constant is the effort of the creators. Back then, it was difficult; it’s so much easier today. All you need is a computer and basic designing skills. The content and the basic concept are the same. What I find fascinating about fanzines is the do-it-yourself approach, as well as the fact that there is a whole new bunch of young kids involved in this thing, whether it has to do with music, comics, painting, theater, video art, or any kind of artistic expression that is independently produced.

What is the impact of Rock n’ Roll music and culture to the racial, political and socio-cultural implications?

I believe that rock music should have a place in the social movements against xenophobia, racism, fascism, sexism, etc. One such example is Antisomata – Antibodies, an activist group made up of musicians; the fact that they managed to bring almost ten thousand people to an event about the refugee crisis speaks for itself. There has to be some kind of coordination among such groups to promote these kinds of events and make them better known to the public. 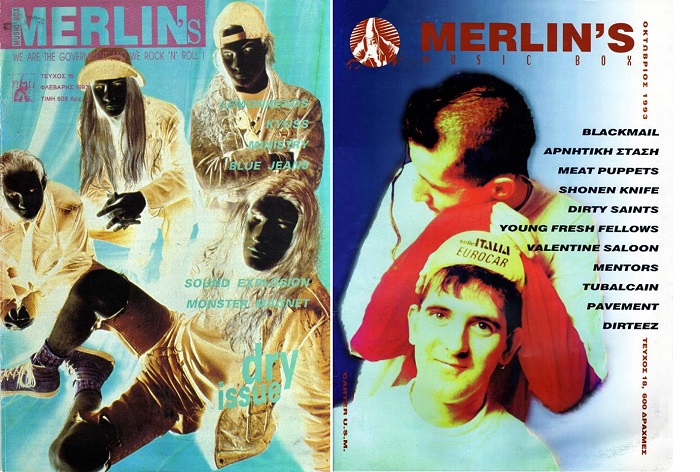 Let’s take a trip with a time machine, so where and why would you really want to go for a whole day..?

I would love to have been present at the studio during the recording of Frank Zappa’s Hot Rats – which, to me, is the most important album of the twentieth century.

What memorabilia (books, records, fanzines) would you put in a "time capsule"? What would you like to ask Merlin?

I would put the entire discography of Frank Zappa, all the books that I haven’t read yet, and every fanzine available. I wouldn’t ask Merlin anything, because he is a mythical character and I’m too much of a realist for that.